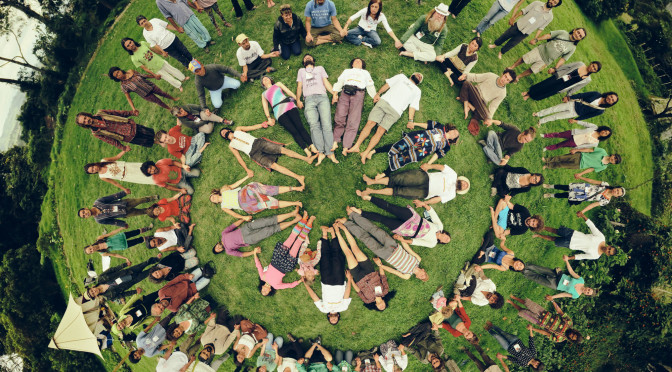 The recent Latin American Permaculture Convergence (or CLAP ) was held from the 15th to the 21st of June in Varsana Ecovillage south of Bogota Colombia. For 5 consecutive days the different open air and indoor spaces of the host community hosted a buzzing 140 people from over 16 countries, which shared tools and strategies in the process incubating and birthing the Latin American Permaculture Network. Some of the countries present included Mexico, Cuba, Costa Rica, Colombia, Ecuador, Venezuela, Chile, Brazil, Peru, Bolivia, Uruguay, Argentina, Germany, United States, and even Russia!

Although permaculture as such only arrived to Latin America 25 years ago when students of David Holmgren and Bill Mollison started disseminating its methods in Brazil and Argentina; many of the principles and tools of permaculture have been practiced here for a millennia. Today, permaculture has expanded all over the continent into what is nowadays a vast and diverse grid of projects going from family farms, educational initiatives, intentional communities to urban projects.

A map of Latin America was created using strings and pins as well as envelopes and cards for everyone to add their place on the map and their business card or contact information. As a result, a beautiful art piece was created representing the web of regenerative initiatives that covers the continent.

The convergence had the following challenges to address:

On the first day of the convergence each country gave a presentation about permaculture in their countries, each describing their own stories about how permaculture came into their lives and how their family and/or community has been transformed by the application of permaculture values, principles and design tools.  Some of these countries have held national Permaculture gatherings such as Argentina that has held almost a dozen regional gathering and four national gatherings, the last one in 2014 with over two hundred participants.

In the afternoon we broke out into specific work groups based on the different petals of the permaculture flower adapted to Latin America. These different petals or focus groups were; Land and Nature stewardship, Natural Building, Technology and Tools, Culture and Education, Finances and Economy, Land Stewardship and Community Governance and Physical and Spiritual well-being. The different work groups met each afternoon for about 2 hours to come up with a proposal for action based on these specific topics that was presented to the entire convergence on the final morning.

On the third day of the gathering, most of the day was dedicated to a permaculture ‘minga’ or ‘community work’ where we all helped to build permaculture terraces and swales  as well as other small projects that needed some hands. It is important to balance the mental work with physical and practical work. This was also a way to capture and store energy from the convergence for the host community.

The last day of the convergence, a small group did a mini-tour to visit two local projects in the area. The first, Villa Mahia , is a real estate project developed a plan of permaculture, organic farming , appropriate technologies and different natural building techniques. The project was launched in the traditional real estate market with great success, generating much interest in permaculture in general,

The second stop on the tour took us to  El Nahual, a permaculture-based community that was founded only five years ago. We walked along a path that passes through the edible forest, lagoon, and the area for the animal and vegetable garden. We could see several buildings in the process, and some finished. There is about 12 people living there, and they receive volunteers who want to learn about Permaculture .

One of the main achievements of the convergence was to birth a permaculture network in Latin America is to generate means of exchange of information, seeds. An alliance of educators and permacultural initiatives to restore each a small piece of mother earth for future generations to live in health and abundance.

On the third and fourth evening a meeting was held with representatives from different countries to choose the host country for the next Latin American Permaculture Convergence to be held in 2017. After the process, many countries offered themselves as the organizers for the next convergence and criteria were presented for selection. After an emotional discussion with many of the participants, an agreement was made to have neighboring Venezuela be the host country for the CLAP 2017. Everyones invited!